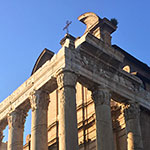 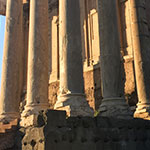 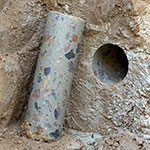 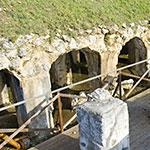 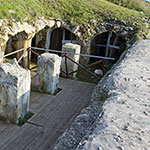 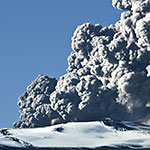 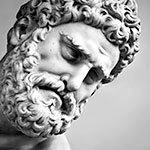 Concrete is incredibly valuable and versatile material—the most widely used human-made material (measured by tonnage) today. Two thousand years ago, the mighty Roman empire was built with it—buildings, roads, aqueducts, cisterns, piers. Their centuries-long empire eventually collapsed, but the concrete infrastructure they left behind did not.

The Romans didn’t use a quick setting cement like our Portland cement. They used hydrated lime—a cementitious product made from limestone which has been heated to drive off the carbon dioxide and transform the Calcium Carbonate into Calcium Oxide (lime) + H2O. But fast set or slow, the key to strong, enduring concrete is Calcium-Silicate-Hydrate (CSH), densified and resistant to chemical attack by way of natural pozzolan.

This hydrated lime used by the Romans does not act like a hydraulic cement on its own, and will only form CSH (that key concrete binder) in the presence of water and a critical ingredient: pozzolan. By either luck or genius, Roman engineers discovered that when lime and water are mixed with a finely graded amorphous silica (known to the Romans as pulvis puteolanus, and referred to today as volcanic ash or pumice pozzolan), Calcium-Silicate-Hydrate (CSH), the most widely used construction material on the planet, is formed.

The secret of enduring Roman concrete (opus caementicium) was lost to the world with the collapse of their empire. Beginning somewhere in the 14th century, the use of cement gradually returned. The Canal du Midi in southern France (150 miles long) was built using concrete in 1670. When Joseph Aspdin patented a method for producing what he named Portland cement in 1824 and, in 1867, when Joseph Monier figured out how to reinforce it, concrete returned to widespread use, fueled by the infrastructure demands of the industrial era. 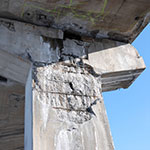 Unfortunately, today’s standard concretes aren’t as good as they need to be—they don’t seem to match up to the world class concrete perfected by Roman engineers in terms of durability. Almost as soon as ordinary Portland concrete is placed, the process of degradation begins. Upwards of 25% of the calcium hydroxide released by the hydraulic reaction is not converted to Calcium Silicate Hydroxide (CSH), the binder in concrete. The excess Calcium Hydroxide, a by-product of the hydration reaction between water and cement—has a tendency to create a host of problems that have deleterious effects on the concrete’s long-term performance and appearance. Unless the CH is provided a pozzolan to capture it and turn it into additional CSH, it is free to combine with expansive chemicals, thus potentially damaging the concrete from within.

Modern concrete formulations can take advantage of the Roman process of converting liquid phase CH to CSH by doing what they did: adding sufficient natural pozzolan to consume all the available CH. In doing so, a potentially destructive by-product is converted into a performance and endurance enhancing agent, rather than left to its own devices to create porosity (allowing chemical attacks and freeze-thaw damage), fuel efflorescence, and spawn reactive problems like alkali silica reaction (ASR).

Additional advantages gained by adding a pozzolan to the concrete mix design include reduced heat of hydration damage, increased long-term compressive strength, and a reduction in the massive carbon footprint from the production of Portland cement—natural pozzolans are not simply added, but are used to replace some of the cement.

Early in the 20th century, engineers faced a dilemma—they needed to build massive concrete dams, but were aware that ordinary Portland cement wasn’t up the job—including critical factors like strength and permanence. They solved the anticipated problems by introducing natural pozzolans to their concrete formulations, replicating the success of the Romans. Natural Pozzolans had again found place in durable concrete construction.

A Growing Scarcity of Waste Pozzolans 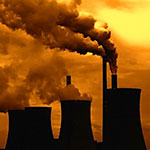 Driven by the need to dispose of the ash scrubbed from the stacks of coal-fired power plants, the power industry discovered the residual ash had similar chemistries to natural pozzolans—a sort of artificial pozzolan. The cement/concrete industries soon transitioned from natural pozzolans to coal combustion residuals (fly ash) as their pozzolans of choice due to cost and availability. Artificial pozzolans, being a waste material, were happily given away or sold at a minimum cost. That dynamic has changed.

Fly ash—in particular Class F fly ash—has played the role of a natural pozzolan replacement for many decades. But as Bob Dylan wrote: “the times, they are a-changing.” The number of active coal-fired power plants is in steady decline. Of the power plants in the U.S. that are currently being permitted or in the construction permitting process, none are to be coal fired. Many existing coal fired plants have been or are in the process of being converted to natural gas. A number of plants have been either shuttered or are scheduled to be shuttered in the coming years. For example, one of the largest suppliers of fly ash to the concrete industry in the American Southwest—the Navajo Generating Station in Arizona—was decommissioned in 2019 and ceased commercial generation in November of that year.

All this to say there is a growing shortage of artificial pozzolan. Most state transportation departments require a percentage of pozzolan in all infrastructure projects—for obvious reasons of durability—and the relentless decline of the fly ash supply has concrete engineers and industry regulatory bodies looking hard for replacement pozzolans. In natural pozzolans, they are finding an exceptional solution backed by quantifiable data and the test of time—over two millennia of hard evidence. Natural pozzolans are sustainable, highly effective, and best of all, performance-consistent pour after pour.

The Natural Pozzolan Association (NPA) is a network of natural pozzolan producers working to improve the performance and durability of the nation’s concrete infrastructure.